← Golden Rule: People Ahead of Products
How Social Can Help Your SEO →

Rules Are Made to be Broken: When the Brand is the Story 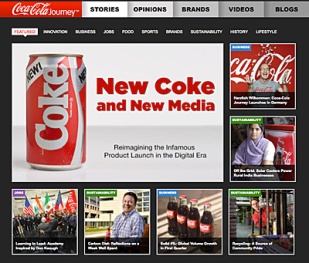 When you look at successful sites on the web, they have a human touch. If they aren’t about people altogether, most of them feature people. That’s because readers want to identify with who or what they’re reading about through emotion, empathy, and ideas. That’s the narrative approach I wrote about in Pro | Content’s last post.

When to break the “Golden Rule”

There are times though, when breaking the “Golden Rule” by writing about your brand makes sense. The Content Strategist’s, timely post on Coca-Cola’s new corporate website is a good example. Sometimes a

brand needs to speak to customers, investors, and ambassadors, writers Joe Lazauskas. And he might be right.

Coke’s new site is a digital remake of the company’s magazine long extinct. It is beautiful and affective. But, I’d quibble, it is those things because it gets the fundamentals right not because it breaks the “Golden Rule.” It tells people-centric stories. It features compelling images. The design is eye-catching. The site is for an audience far beyond the company’s power-users and fan-boys.

The blue pill or the red pill

Coke can tell the story of its brand because it’s an American story of small business owners, innovators, conservationists. We know

And Coke isn’t alone. Check out another Blue Chip company, General Electric. GE  equates its brand with health care innovation on its site. And while I’m not sure I would have chosen the antagonist from “Matrix” as the spokesperson for the benefits of a digitally connected society, I couldn’t help but click on the video to see what would happened next.

Posted on April 26, 2013, in Business, Marketing, Nonprofits. Bookmark the permalink. Comments Off on Rules Are Made to be Broken: When the Brand is the Story.

← Golden Rule: People Ahead of Products
How Social Can Help Your SEO →