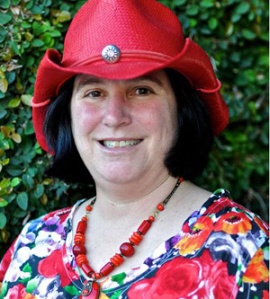 But then, something unexpected happened. Kanter, a visiting scholar for social media and nonprofits at the David & Lucille Packard Foundation and co-author of the books “The Networked Nonprofit” and the follow-up “Measuring the Networked Nonprofit,” asked everyone to stand. “Repeat after me,” she chimed. “I give myself permission to fail… No, no. Louder. Say it like you mean it.”

“I call that a ‘failure bow.’ Now you can stop worrying about falling on your face and start learning,” said Kanter, speaking at Oakland’s East Bay Community Foundation as part of the OakTech Talk series.

To keep the fear of failure at bay, Kanter offered nonprofits 6 tips.

For those hardest to convince, Kanter suggested finding an ally in your organization who can help make your case and to be your sounding wall. In addition, track and compare your organization to its peers. It can be a secret weapon. After all, what’s more powerful than old fashioned peer pressure?

Comments Off on Beth Kanter: 6 tips to measure your networked nonprofit 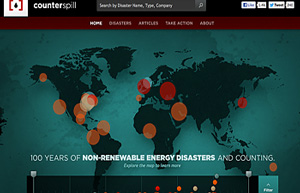 One of the best websites of 2012 was created by the folks at CounterSpill. It has an interactive map of coal, gas, nuclear, and oil spills, tons of videos, up-to-date news stories, a community blogs feed, and an updating Twitter feed.

The centerpiece of this site is the interactive map. Readers can click on a specific spill and be taken to a landing page with video, a timeline of events, photos, and facts about the spill.

From interactive to engaged

In contrast to the Pine Ridge Sioux site, which is an interactive and interesting site, Counterspill goes the extra mile to engage its readers. Right up at the top the homepage, readers are invited to become part of CounterSpill’s social media community. There is a rotating feed of the latest Tweets about various spills. Bloggers’ and activists’ videos feature prominently on the site, below the fold. And news stories, also below the fold, show the number of engagements, e.g. Facebook likes and re-Tweets.

This is a beautiful site. I especially enjoy the way the Tweets, news, and community feed rotate horizontally as well as vertically, offering readers twice as much information without scrolling. Genius!

Comments Off on Your web content dreams come true

Does your site “close the sale”? 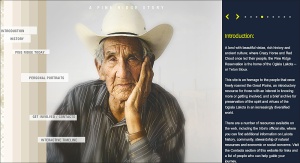 If you read as many online marketing blogs and follow as many web content experts as I do on Twitter, you already know that everyone is buzzing. It’s all about “engaging” readers rather than click-through rates these days. If they’re right, then websites that invite readers to explore must be sitting back smugly at the moment.

In my experience, the sites that do this really well — that create an online sense of “place” are few and far between. That’s probably for good reason. Readers who want to renew their driver’s license online aren’t looking for a sense of place. They want to complete a transaction and get back to re-runs of Arrested Development.

What we can learn

But sites that invest the time, money, and creativity into creating an experience of place have something to teach the rest of us. Everything about the Pine Ridge Sioux site is engaging. The images dazzle. The navigation is elegant. The text is brief and impactful. It’s harder to not engage with this site than to engage with it. Feast your eyes; enjoy. That’s the good news.

Unfortunately, site falls short on the actual engagement. Engagement being encouraging social sharing, measuring content ROI, and capturing leads on readers who might be drawn to the Sioux cause. How can visitors to the reservation share their experiences? How can readers see what pages attract other visitors? These problems might be solved with something as simple as Digg Digg. But after the content and design did so much heavy lifting, they’re left hanging waiting, wanting for a high five.

Comments Off on Does your site “close the sale”?

Take your Twitter engagement to the next level, try to connect with three new people a day — @jeffbullas on JeffBullas.com

I came to web content from journalism. I was a writer and editor. Sure, I took a photo here and there for a story. But I had no doubt when I started in this business that words and how I put them together mattered most above all else.

Today, I handle images and videos weekly, even daily. I read upwards of 100 web pages in a week. I’m here to tell you, I was wrong. I’m a changed man.

Don’t misunderstand, the stories on your website are critical. Good writing and editing re-enforce your company or nonprofit’s brand and allow visitors a glimpse into who your are and what you’re about. The problem is that visitors these days have so much going on they won’t stick around without good imagery to hold their attention. The flip side is that visitors will stick around for good imagery, assuming your site has what they’re looking for.

The good news is that you can use visitors’ tendency to peruse good imagery to your advantage. I call it the Bing Effect. More web sites are combining a minimalist approach with imagery and search as the focus to capture visitors’ attention. Boring government web pages? Not these.

While this elite group of pages might be at one end of the spectrum, they re-enforce my point that imagery deserves serious consideration and the appropriate budget to back it up compellingly.

Comments Off on How your site can bling like Bing